Blog by Kirsti Harms and Della Barbato The Houston Chapter – Native Prairies Association of Texas (HNPAT) will be presenting its 2021 Prairie Volunteer Award to Charles Barfield on Wednesday, December 8 (6:30 pm to 8:30 pm), at the annual … Continue reading →

Rolling announcements for the September 22, 2021 meeting is at https://tinyurl.com/21SepHNPATmtg

Here are the rolling announcements for August 25, 2021 HNPAT meeting: https://docs.google.com/presentation/d/1F4cFP9SxopkqDnSDtsLSMlJqw2DBXtymfpG3bNzlP2M/edit?usp=sharing

Go to the home page HoustonPrairie.org to get ZOOM registration link.

·Articles and studies on decline of overall insect/arthropod numbers

As they become available, updated information on this event will be posted on the homepage of HoustonPrairie.org.

Save the Date: Saturday, September 25, 6-9pm: Party for the Prairie

Join us for a fun evening of dinner and fundraiser for the Lawther-Deer Park Prairie Education Program at the Silver Sycamore, 5111 Pine Avenue, Pasadena, TX 77503 (silversycamore.com) 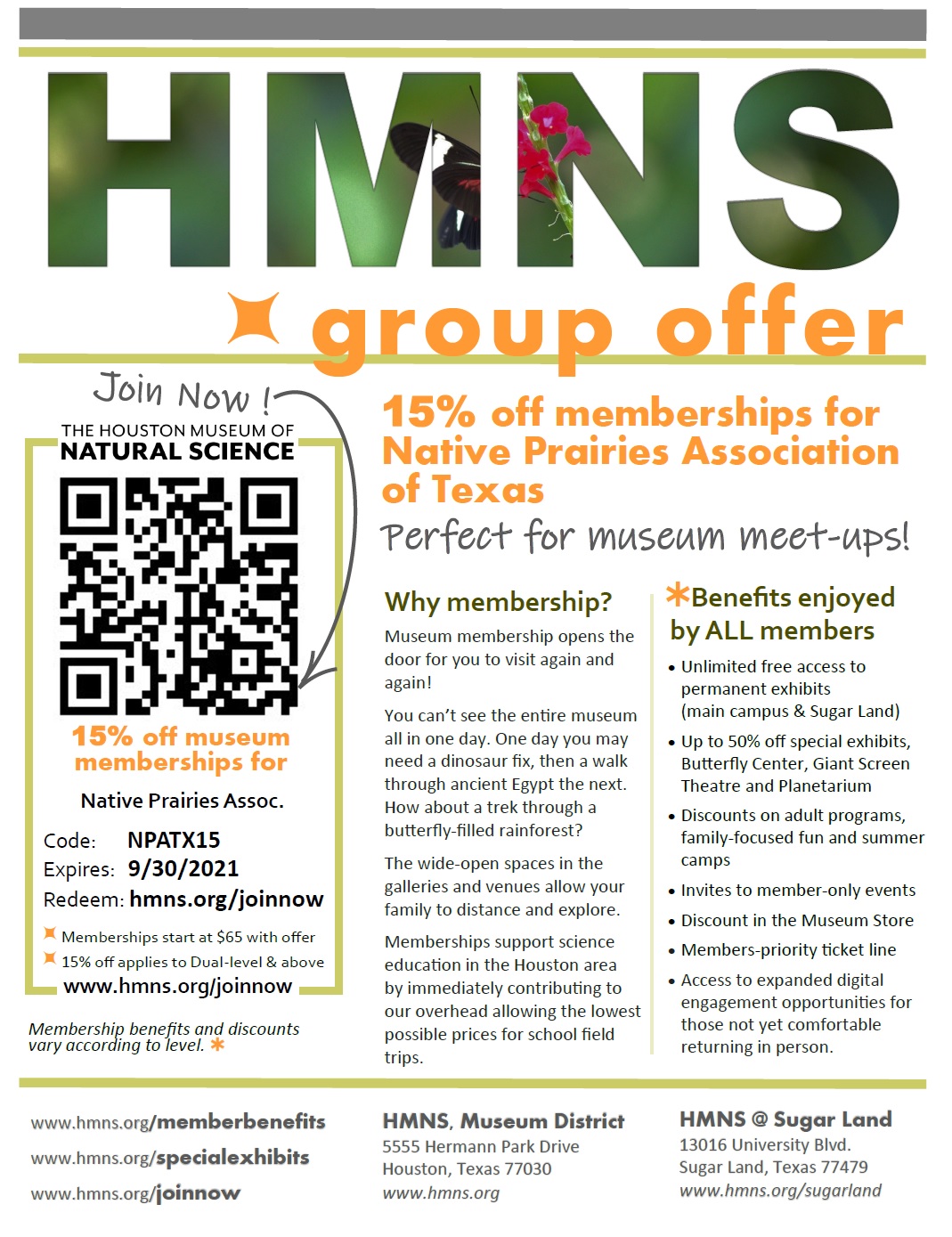 Not only will an HMNS membership feed your love of science and the natural world, it supports science education in your community.

Why membership?
Museum membership opens the door for you to visit again and again! Membership includes HMNS in Hermann Park and HMNS at Sugar Land.

You can’t see the entire museum all in one day. One day you may need a dinosaur fix, then a stroll through ancient Egypt the next. How about a trek through a butterfly-filled rainforest?

The wide-open spaces in the galleries and venues allow your family to distance and explore.

Memberships support science education in the Houston area by immediately contributing to our overhead allowing the lowest possible prices for school field trips.

Following the original Nine Natives, presenting in 2018, The Houston Native Prairie Association, Katy Prairie Conservancy, The Nature Conservancy Texas, and Clark Condon, Landscape Architecture present the next step: Nine Natives for Shade Gardens. The purpose of this guide is to introduce a simple palette of native plants for shade gardens for the Houston area. Creating a garden using native plants or adding natives to an existing garden can be simple and rewarding. The Nine Natives for Shade Gardens (plus a few alternates) were selected to work together to give a beautiful show in the garden throughout the year.

Beth Clark is a professional Landscape Architect with over 30 years of design experience with the award winning firm of Clark Condon, Landscape Architecture. Recent projects include design for the Houston Parks Board Bayou 2020 trails system and the Houston Botanic Garden. Beth is on the board of HNPAT and Urban Harvest and has an passion for prairies, plants, and natives species.

Link to the Nine Natives for Shade Gardens booklet at tinyurl.com/9NativesForShade

You may log in as early as 6:30 PM to work through any connection issues.

Addendum: Keep checking our website HoustonPrairie.org for information about the upcoming Moth Night at Deer Park Prairie on a weekend date between July 17 – July 24.

The University of Houston Coastal Center, located in La Marque, is the home of the Texas Institute for Coastal Prairie Research and Education.  The 925-acre site is a mosaic of pristine coastal tallgrass prairie, wetlands, forest, and coastal prairie in the process of restoration.  The UHCC is a fenced and gated facility, but participants in the Houston City Nature Challenge will be welcome on Friday, April 30.

The gates will be open from 8 am to 9 am and from 11 am to noon.  A UHCC representative will be at the gate to sign you in.  When you sign in, you will be given a number to call when you are ready to leave so that the gate can be opened.  We will sign people out as well (especially since we don’t want to leave anyone behind a locked gate!).  We ask that visitors finish their surveys by 2:30 PM.

It would be a good idea to wear long pants and close-toed shoes, especially if you plan to walk out on the prairie.  A hat is a good idea.

There are restrooms in the lab building, which will be open.  Park in the back of the building and enter through the double doors.

I will be on site all day.

The U of H Coastal Center is located south of Houston off of I-45 (Gulf Frwy.) next to the La Marque Dog Track.  Take the FM 1764-West exit from I-45 (Exit #15) and go WEST.  DON’T take the FM 1764-East exit!  After you exit onto the service road and reach the stoplight at the intersection with FM 1764, turn right (west) IF YOU ARE COMING FROM HOUSTON.  IF YOU ARE COMING FROM GALVESTON, turn left (west) underneath the freeway. Next, make a left at the stoplight intersection onto FM 2004 and follow the road for about 1/4 mile.  A Whataburger will be on one side of FM 2004 and the dog track will be on the other side of FM 2004.  The road will join another and turn to the right.  Go about 1/2 mile further on FM 2004 and the U of H Coastal Center will be on the right just beyond the dog track.  The UH Coastal Center/Texas Institute for Coastal Prairie Research and Education  is surrounded by a fence with a sign at the gate.    Evelyn Evelyn L. Merz, M.B.A.Program DirectorUH Coastal CenterThe Texas Institute for Coastal Prairie Research and Education5721 Highway 2004; La Marque, TX  77568

Read the next blog for basics of City Nature Challenge & Deer Park Prairie being open on May 1, 10 a.m. – 2 p.m. to CNC participants.

“We are very excited to be just about two weeks away from this year’s global City Nature Challenge (April 30-May 3, 2021)!

Don’t let the title fool you. Yes, we absolutely want to observe and record species in our wonderful cities – like Houston and Galveston – but you can do this even in much of the countryside and seascapes surrounding our cities – we are all in this together (see the map… to see what counts in the Houston-Galveston region)!

[Note: to sign up for the Houston-Galveston City Nature Challenge Team:

This year, the Houston-Galveston City Nature Challenge Team (if you make observations in our region during CNC, you are on the team!) will join over 200+ Global Cities to observe, record, and identify the wildlife, plants life, and other living organisms of their regions using the amazing, free iNaturalist app. We will also be competing against other Texas regional teams, including the tough, talented team from Dallas-Fort Worth. This is real community science in action. The observations we make using the iNaturalist app can be used by scientists to track wildlife and plant populations and even plan habitat restorations that will benefit both them and humans.

Last year, even during the pandemic, our regional team set new records (see attached card). Lastly, we want you, your students, and your staff to be absolutely Covid Safe. Click here for some helpful hints on staying safe. Also, make sure to adhere to your local social distancing/masking guidelines and recommendations.

Below, please find resources to help you learn more about and engage your students with the City Nature Challenge and the iNaturalist app, and to create your own campus or neighborhood iNaturalist project that you can use during the City Nature Challenge and beyond! If you have any questions, need any resources, or want to share events or activities, please do not fail to contact me, Suzanne Simpson with Bayou Land Conservancy, or Nicole Temple from the Houston Museum of Natural Science – your regional co-coordinators 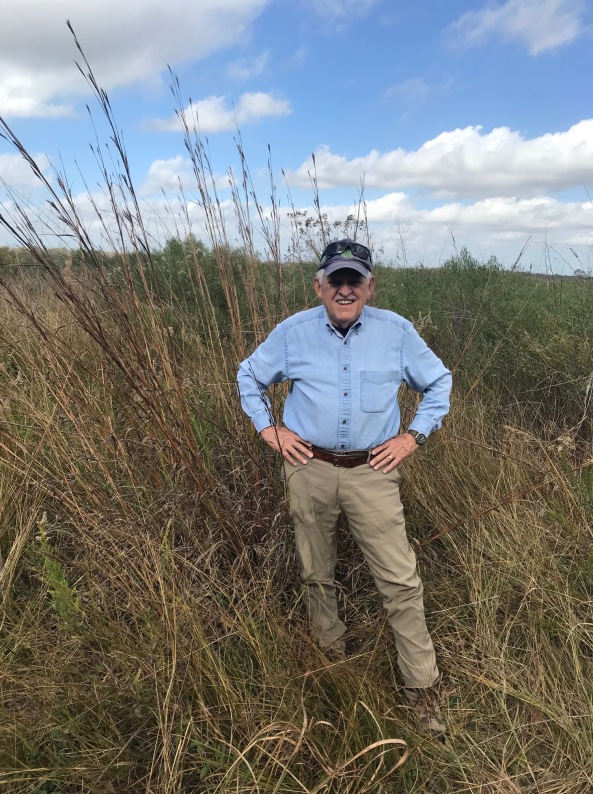 HNPAT (Houston Chapter – Native Prairies Association of Texas) will be presenting its 2020 Prairie Volunteer Award to John Egan on Wednesday, December 2 (6:30 pm to 8:30 pm), at the annual Prairie Stampede via zoom this year (registration required at this link). (See flyer here)

The award is given to John especially for his work over the years at Sheldon Lake State Park as well as his other prairie volunteer work. In 2008, shortly after joining the Prairie Restoration Team at Sheldon Lake S.P. under the mentorship of Tom Solomon and Jim Duron, John became the leader of that Team. In that capacity he provided weekly planning for volunteers and served as the interface between Park Staff and the Prairie Team. 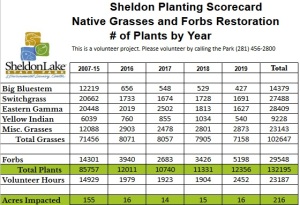 He also gathered and maintained detailed records of the Prairie Team efforts which included the names of volunteers and their hours, planting and propagation data by plant type, planting location information, and plant type inventory records. (Example Summary Report attached).

He also planned and lead Sheldon’s annual Prairie Plant-a-thons over the past decade which involved working with 100 or so volunteers and school groups to plant 1000-2000 new plants into the prairie.

John had become a Gulf Coast Master Naturalist in the Spring of 2008 and then served on the Chapter Board for 4 years as Secretary. He has participated in other prairie volunteer work. Periodically he participated as a team mentor at Armand Bayou Nature Center assisting volunteers for their annual Prairie Pandemonium event. He was also active at Jesse Jones helping to remove invasives off trail to allow native grasses and forbs room and sunlight to rebound. Also at Jesses Jones, with the help of GCMN volunteers, 100 native grasses and forbs were planted in the park’s pocket prairie. John is also a member of the Green Team at the Houston Parks Board. And when not involved in restoring native habitat, John spent several years at Sheldon trapping invasive beetles for a project sponsored by the USDA.

In 2016, John received the President’s Lifetime Achievement Award for volunteer service signed by President Barack Obama. In 2019, TPWD recognized John with the Stars in our Parks award for his work at Sheldon.  This year he will have achieved approximately 7500 volunteer hours much of which has been dedicated to prairie restoration. He continues to volunteer weekly at Sheldon as a member of the Prairie Team splitting his efforts to all the various activities. Going forward however he plans to spend more time on invasive management allowing the native prairie, now restored by restoration planting, to maintain a long and productive life.

John also sent the following thanks:

I would like to thank HNPAT for this very valued recognition coming at a time in my life I can really
appreciate it. Special thanks to my wife Trish (an indoor girl), for her continued support to all my
outdoor adventures. Thanks to Tom Solomon for keeping the faith and to all the current members of the
Prairie Team at Sheldon consisting of Texas Master Naturalist and Park volunteers:
Gulf Coast Chapter – Paulette Pittman
Melinda Kincaid
Joan Ward
Jane Shaw
Chatt Smith
Galveston Bay Area Chapter – Lana Burkowitz
Tom Solomon
Lower Trinity Basin Chapter – Mindee Poldrack
TPWD Volunteers – Glenn Braden
Kaveh Moghadam
Gus Cei

And a final thanks to Sheldon Lake Superintendent Kelley Parker and Resource Ranger Matthew Moore
for providing the opportunity.”