The Lawther – Deer Park Prairie Preserve is an unbelievable piece of living history, a rare remnant of our natural heritage – the coastal prairie – that is essentially the same today as it was thousands of years ago. For thousands of years before the first settlers arrived, most of Harris County was coastal prairie, “a sea of grass” as tall as a man and teeming with wildflowers, grassland birds, and wildlife from the bison to the horned lizard. Today, much less than 1% of that ecosystem still exists. Of the large ecosystems of North America, the coastal prairie has been called “the rarest of the rare” (D. Ladd, TNC); it is so rare that most Houstonians have never seen it. With the preservation of Deer Park Prairie, hopefully that will change. 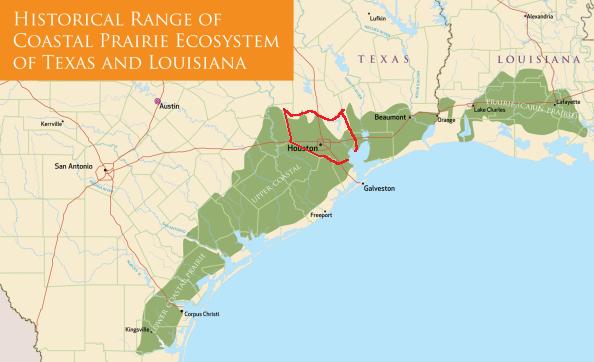 The Lawther – Deer Park Prairie Preserve was saved from development as a result of an amazing fundraising drive by Bayou Land Conservancy (BLC) in August – September, 2013 to raise the $4 million purchase price. Contributions in amounts from in the millions to a few dollars came from over a thousand people from all over the U.S. and even from two other countries plus from many organizations such as the Native Prairies Association of Texas (NPAT), Houston Audubon, the Katy Prairie Conservancy, the Gulf Coast Bird Observatory, etc. All contributors had a common goal – to preserve this land for its neighbors, for children’s outdoor education, for its history – especially significant since the Battle of San Jacinto was fought less than ten miles away, for prairie and ecological lessons and research, for its seed source, and of course for the plants an

d animals that call it home. That goal was realized when the land was purchased by BLC on January 27, 2014 and deeded to NPAT. The Conservation Easement signed on February 14, 2014 between BLC and NPAT permanently preserves this land, so that it will never be developed. NPAT is now responsible for Deer Park Prairie’s care and management and the development of an education program on the prairie. NPAT is asking for our com
munity’s support in meeting these goals and responsibilities.

As private property, the Lawther – Deer Park Prairie Preserve is open to guests of the Native Prairie Association of Texas (www.TexasPrairie.org) by appointment only. NPAT welcomes the opportunity to share with guests the diversity of this prairie throughout the seasons. In spring, visitors will see colorful wildflowers. Early summer is the time for blooming Texas coneflowers, the yellow Rudbeckia texana that, in the world, only grows in Harris and three other Texas counties plus in a few Louisiana counties. In late summer the pink/purple liatris dominates. In fall, the grasses ripen; the pink mist of the Gulf muhly blooms, 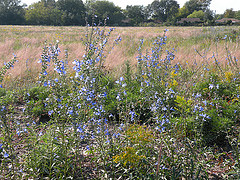 the blue pitcher sage, and the silvery leaves plus bright yellow blooms of the silkgrass are breathtaking. Finally, in our wet winters, the wetland plants thrive and grow among tan/brown stalks of grass past their prime. Deer Park Prairie is worth visiting in every season.

Acknowledgements:
Thanks to Flo Hannah, Jennifer Lorenz. Thanks also to Don Verser for use of his photos and Pauline Singleton for use of the photo of redwing blackbird on coneflower and Coastal Prairie Partnership for use of the map.