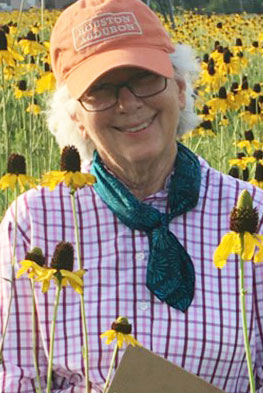 “Dear Friends,
It is with a very heavy heart that I write to you today. Our friend Flo Hannah lost her battle with cancer this afternoon. She fought until the end.
.
Flo was a wonderful advocate for nature and and even better friend and mentor. Her spirit, vision, passion, and smile will be sorely missed by all of us. I will await word from the family about funeral arrangements and will let you know as we know more. I also wanted to let each of you know how much you mean to the rest of us and how much your friendship and support mean to one another. In many ways we are like a family and the lost of any of us is deeply felt.
.
Your Friend, Always,
Jaime González
Community Conservation Director, Katy Prairie Conservancy”
.
Flo Hannah of Houston Audubon Society (HAS) and Native Plant Society of Texas – Houston (NPSOTH) was a giant in our local prairie, native plant, and conservation community. Directly and indirectly, she was responsible for saving the Deer Park Prairie and the Nash Prairie among many other lands that she helped preserve through her work at Houston Audubon. In one of my earliest encounters with Flo, who was then NPSOTH Field Trip Coordinator, she and Dr. Larry Brown led us to an area in Fort Bend or Brazoria County that HAS had just conserved.
.
Flo was especially passionate about our native grasses and was an expert in that subject. She knew that these grasses and other native plants provided much needed habitat and food for many birds. She was one of the first, if not the first person in greater Houston to collect seeds of local native grasses, grew them, and started a business in back of her house to sell them commercially, in order to provide a much needed source for local restoration projects.  Then she expanded the effort by creating the Houston Audubon’s Natives Nursery at Edith L. Moore Sanctuary with volunteer labor. Katy Emde reminisced that back in the day, she and Flo talked about gathering local native seeds and growing native plants to sell, but Flo was the one who actually did it.
.
Flo was not only passionate herself about our local natives and habitats, but she taught and inspired others around her to be passionate too. She led and we followed. When she realized that a rare prairie remnant on Saums Road (near Greenhouse) was to be sold and turned into a flood control detention basin, she – in the middle of August – motivated volunteers from HAS, NPSOTH, and Texas Master Naturalists to rescue (dig up) and replant the native plants from that site to various pocket prairies throughout greater Houston.  Moreover, she convinced Harris County Flood Control to use heavy equipment to move larger sections of that prairie remnant to Harris County Parks and the pocket prairie on Brays Bayou at South Braeswood near Buffalo Speedway. Through the years, Flo motivated volunteers to participate in her pocket prairie workdays, Horseshoe Marsh restoration workdays, rescue of Willow Waterhole plants and many other projects.
.
Jaime Gonzalez has told the story many times of how from the agony of losing the incomparable Saums Prairie, he and Flo formed the Coastal Prairie Partnership (CPP) to promote our local prairies. Flo was for many years on the board of CPP (as well as that of NPSOTH).
.
Because of the agony of losing Saums Prairie, Flo was instrumental in the saving of the Lawther – Deer Park Prairie Preserve. Shortly after she and Don Verser first visited the property that is now Deer Park Prairie, many of us prairie enthusiasts were gearing up to rescue plants from that land, which was to be developed. However, Flo said that she wanted to meet the landowner and find out what it would take to preserve that prairie. Without that initial act, the platinum quality Deer Park Prairie would now have been a development with 200 houses. Then, when she found out that the selling price was $4 millon, Flo and Jaime led the first effort to raise the purchase price, despite many people saying that it could not be done.
.
Without Flo, the Nash Prairie might also not have been conserved. Flo gave many talks about prairie grasses especially in the early days, when perhaps hers were the few on that subject available. Grasses are hard to learn. I remembered the many times I sought out her talks in the hopes that eventually by repetition, I would understand and learn glume, lemma, palea, spiklets, florets… As I remember the story, Susan Conaty also attended one of Flo’s talks where she saw photos of local grasses and forbs and realized that a property of West Columbia’s St. Mary’s Episcopal Church that she and her husband Peter, the pastor, monitored had some of the same plants. She talked to Flo and discovered that some of Flo’s photos were of that exact property. That was the start of Susan and Peter’s passion for the Nash Prairie – a chance encounter with Flo that eventually led to the Conatys’ saving the Nash Prairie.
.
These are only a few of Flo’s accomplishments which earned her the Coast Prairie Partnership’s 2017 Prairie Excellence Award at last November’s Prairie Stampede. A video of that presentation could be seen on youtube.
.
These are just some recollections from my encounters with Flo and the people she influenced. Some stories were heard second hand, so if there are any inaccuracies, please let me know and I will correct them.
Lan, an admirer of Flo Hannah, the person she was and all that she accomplished