From Kirsti Harms, NPAT board member:

“I see from the Facebook posts that our former president and founding member, Kunda Lee Wicce (Lee Stone) passed away on Saturday August 12. … She was a passionate advocate for prairies….

I found one of the last items Kunda wrote as president in the Fall 2008 [NPAT] Newsletter. It gives a sense of our history. Here’s a photo of her at Daphne Prairie holding grasses, something she always seemed to [be] doing!” 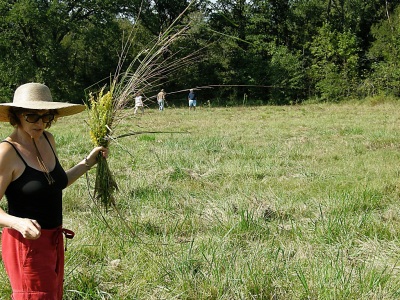 “This message makes a good marker for the end of an era of sorts. We were founded in 1985, after eccentric, multi-degreed, prairie-conservation-minded, retired British physician Geoffrey Stanford turned to Dallas kindred spirits Madge Lindsay and Arnold Davis at a special touring tallgrass prairie exhibit—which they had themselves put together—and said something brief like “is there an association in Texas for conserving prairies?” Upon hearing the answer in the negative, Stanford continued with “then we must found one.” And we were. Geoff had something like this in mind when he attended the 1984 North American Prairie Conference—which is put together biennially by whoever is willing to do it—and at the post-meeting stood and asked for approval for Texas volunteers to organize the 1986 NAPC! And they did. We still have proceedings from that conference which focused on Texas prairies—it is an excellent series of papers by our best prairie minds.

I was recruited to the Board of Directors in 1987 by Arnold Davis—another wonderful prairie person who cut his prairie teeth with the Soil Conservation Service during the large-scale replanting and soil stabilization work in the Dust Bowl states. Arnold happily mentored all of us in the ways of restoration, drove all over the state, and wore his love of prairies on his sleeve for all of us to see. R.C. “Rollie” Mauldin was another delightful SCS elder who appeared at almost every field trip and meeting. He exhorted us new prairie people to pay close attention to the native legumes, and to remember that a good restoration needed multiple legume species as some species would be most palatability at different times. So, every time I think of Rollie and mention his name, I pass on his message.

I was very very lucky indeed in those earlier NPAT days to have known our inspiring prairie elders, including Edith Hoyt, and Dr. Paul and Virginia Mezynski. Geoff, Arnold, and R.C. have been gone now for a while. Edith passed away last week. It has been with some sorrow now that I’ve realized I’m the last one on the Board who knew them, which makes me an elder of sorts. They would all be cheering to see we are entering a new era of prairie conservation in Texas!

We are focused and we are increasingly more effective. After laying groundwork—and with Jason Spangler’s business acumen—we have received important grants from the Houston Endowment, the Meadows Foundation, Texas Parks and Wildlife, and the Dixon Water Founda­tion to support professional staff, and—for the next two years—to employ prairie-wise contractors, to actively scour each historic tallgrass prairie county to catalog the remnant fields of tallgrass in this state.

This galvanizing survey across 94 Texas tallgrass counties has already added a few hundred prairie owners to our database. We are finding more tallgrass than was previously guessed and it is our intention to reach out to all these owners, offering praise and celebration of what they and their predecessors have been stewarding since settlement times. We also desire to support a network among all prairie owners, and to share information on management and economic opportunities.

I have now served on the NPAT Board of Directors for 22 years. I am standing for re-election to the board to serve for one more term, to be of whatever assistance I can be during this exhilarating transition time, yet this is my last time to serve as an officer. It has been my honor and my great pleasure to serve in various roles with NPAT over these years, always with eyes on the prize of native grassland conservation. My attention is turning towards international grassland conservation and I want to see in what ways I can be helpful. If I’m blessed and persistent, perhaps someday I’ll be emailing reports to this Journal from a Himalayan grassland plateau!