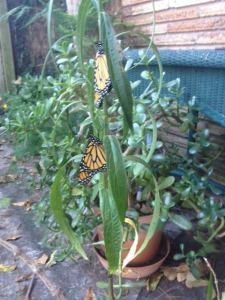 For the silent auction at the Deer Park Prairie Celebration on April 5, 2014, Barbara Willy donated 2 Monarch Way Stations.  Janis Terry won the bid on one of them. Barbara planted the Monarch Way Station in Janis’ yard shortly thereafter.  This is the result:

Janis’ Deer Park Auction Monarch way station delivered its first offspring. She took the caterpillars inside to protect them from predation and now the butterflies have “eclosed” (emerged) from their chrysalis. And I just noticed she has one male and one female. The black dot on the wing of top butterfly denotes male.

From Janis Terry to Barbara Willy earlier on the same day:

Two Monarchs were waiting for me this morning! They are the first that I know for sure came from the garden you planted. Exciting!