On Saturday, May 17, Brandt Mannchen led a group of 11 who visited the Blackland Prairie of the Sam Houston National Forest.  This was both a 2014 Prairie Power Series event as well as an NPAT field trip. Half of the group carpooled from Houston. 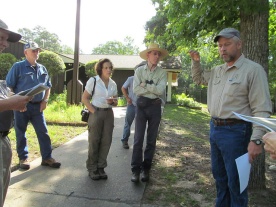 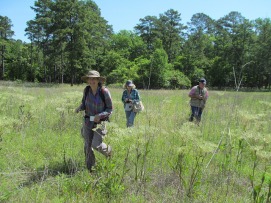 Because of an Ironman Race in the area that was causing traffic jams, they decided to first show us the largest compartment and after that, a smaller one that was recently burned.

Rusty explained that before their restoration, that first area was full of the extremely bad exotic invasive, King Ranch bluestem that was herbicided. Native grasses were planted using a seed drill following that. We saw the grasses – many Indian grass (Sorghastrum nutans) – that they planted and the many prairie Indian plantain (Arnoglossum plantagineum), Prairie acacia (Acacia angustissima), and other forbs grew from the soil, after the herbicide treatment. 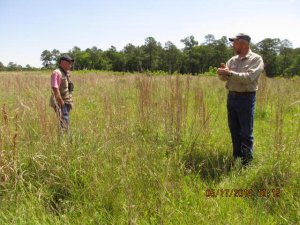 At the largest compartment, which was almost all exotic invasive King Ranch bluestem before restoration.

After viewing that area, we went to lunch and after lunch to Compartment 2, a smaller prairie opening that was burned about two months ago.

Compartment 2 was breath taking! Many of us have never seen so much purple coneflowers together!  The whole field was full of the Echinacea atrorubens! The prairie acacia, ratany (Krameria lanceolata), rattlesnake master (Eryngium yuccifolia), and many other grasses and forbs were at this very biodiverse blackland prairie.

Thanks to our US Forest Service guides who gave up their Saturday and to Brandt Mannchen for organizing this wonderful, informative trip.  Some photos are below.  More are posted at the HNPAT Flickr site: https://www.flickr.com/photos/hnpat/ , “2014 Power Series Event” album. 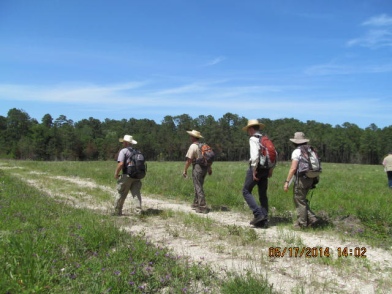 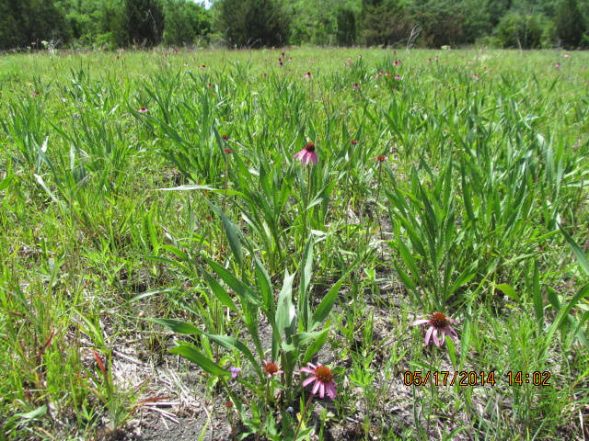